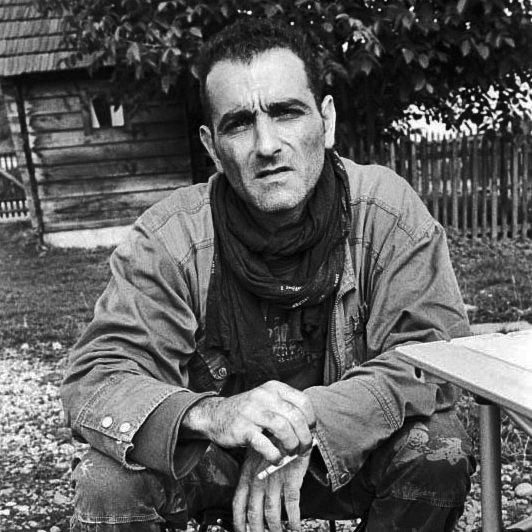 Anikitos Hadjicharalampous was born in Limassol, Cyprus in 1966. He has a degree in marketing from the Technical Educational Foundation of Athens and a diploma in Travel & Tourism from London City College.
A self-taught photographer, he began to photograph at a relatively advanced age, in his 30s. In 1998 he was employed as a cameraman by Mega Tv Channel after TvOne Channel (now called OMEGA Tv Channel), in Cyprus and thus became interested in photojournalism. At present, he mainly focuses on documentary photography, drawing his subjects from the people's daily lives.
In 2000 he travelled to the Gaza Strip with the Doctors of the World - Cyprus during the Intifada. Also, with the same organization in 2003 he travelled to belligerent Iraq, in 2006 to the flooded areas of Romania, in 2008 in Sri Lanka to support the victims of the areas affected by the Tsunami. In 2009 in West Sumatra, Indonesia, as part of a mission with Volunteer Doctors – Cyprus for providing medical assistance to residents of earthquake victims and in August 2016 with the same Organization in Nairobi, Kenya to support the children on St. Clement Primary School in Riruta slum. In August 2018 (in the framework of a long-term project on Orthodoxy), he travelled to the Greek island of Karpathos, known for its customs and traditions in celebration of August 15th.
In 2001 he took part in a group exhibition entitled "Gaza, Land Under Shadows" as well as in the photographic journal published by the Doctors of the World - Cyprus under the same title. In September 2004 he presented his first solo exhibition entitled "Visitors in their Land" on the crossing over of Greek Cypriots to the occupied areas after the opening of check points on April 23, 2003. In November 2008 he issued his first personal photo album under the same title: "Visitors in their Land". Also, in 2018, after gaining a reward, he created his second photo album called “Monologues and Quests”.
He has taken part and was awarded in several competitions, while part of his work has been published in local magazines and newspapers.
At present he continues to collect photographic material in the framework of a long-term project, Lost HomeLand, related to the occupied part of Cyprus and also is working on another long-term project, Orthodoxy.